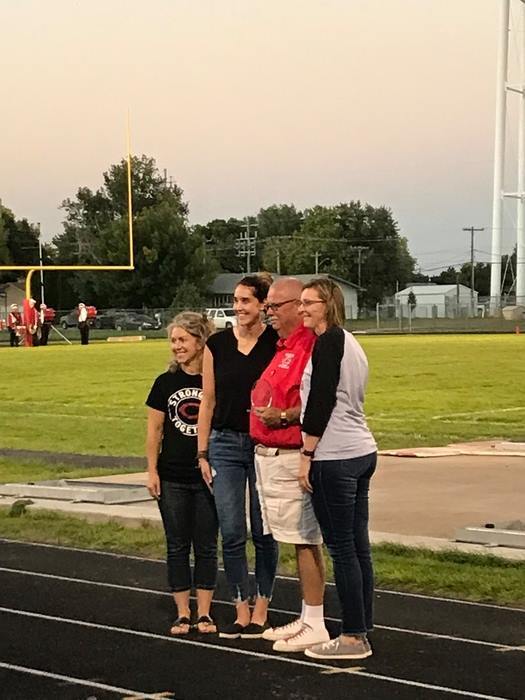 At halftime of the Cozad vs. Sidney football game on Friday, September 14, Tim Hansen and his late wife Bonnie were named recipients of the sixth annual Make Your Mark on Cozad Award and presented a plaque by Cozad Library Foundation President Claire Bazata.

The Make Your Mark on Cozad Award is presented in conjunction with the Wilson Public Library’s celebration of International Dot Day. Themes of Peter H. Reynolds’ book The Dot:  creativity, courage, and collaboration, inspired the observance of September 15th by teachers, libraries, and artists around the world. Given as a way to spotlight community members who are enthusiastic supporters of the library, Cozad as a whole, and the arts specifically, the inaugural award was bestowed upon Mrs. Katherine Wilson in September 2013.

Members of the Cozad Library Foundation were quick to select the Hansens for the prestigious award at their last regular meeting in early April. Bonnie was a long-term promoter of the library and an avid reader. As a former Cozad High School teacher, Bonnie also gave her time to helping many Cozadians through their high school career and was an active sponsor of FCCLA and Pep Club. In the past few years, Bonnie worked with Jan Anderson to create many of the barn quilts around town as outdoor art and helped with Relay for Life. Her culinary arts skills were unmatched as well. Tim also influenced numerous Cozad children and parents as the long-time Cozad High School counselor. Tim, too, has devoted much of his time serving Cozad in many civic and philanthropic capacities such as an active member of the Cozad Ambassadors, a board member of the Robert Henri Museum, a member of the Cozad Development Community Action and United Way Boards, an instrumental part of TeamMates, and the American Lutheran Church.